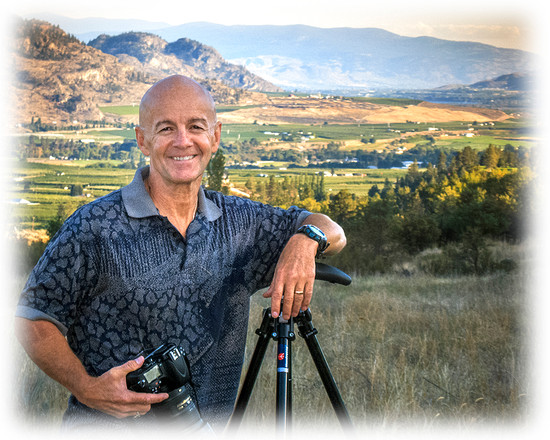 Paul Eby's interest in photography began at the age of 19 while working for a small photofinishing business in Ontario. The more he learned, the more his thirst for knowledge increased, and it wasn't long until dreams of making photography a profession became a burning desire.

In 1981 Paul, his wife Barbara, and their young daughter moved to the Okanagan, a place he had visited as a teen but always yearned to return to. A year later, they settled in Oliver and followed his dream of starting a part-time freelance photography business "Living Photographic". Although this was an exciting step toward his dream, it wasn't until 1987 that Paul and his wife, with the support of their two children, opened a complete retail photography storefront "OK Photo Lab" which is still a thriving business today.

For the past thirty years, Paul's insatiable desire to explore the local surroundings and capture the beauty of the valley photographically has helped him to produce some of the most stunning images this area has to offer. A number of his images have appeared in publications such as West Jet's inflight magazine "Up", "Okanagan Business", "Wine Access", "Wine Trails", "Wineries Refined", etc.

Recently, Paul has had the opportunity to travel and explore other parts of the world and capture its images. This has allowed him to expand his portfolio and offer his clients more choices of his photographic art.

Paul is continually looking and searching out new photographic opportunities and is rarely seen without his camera while traveling about the Okanagan Valley.
© Paul Eby Photography
Powered by ZENFOLIO User Agreement
Cancel
Continue